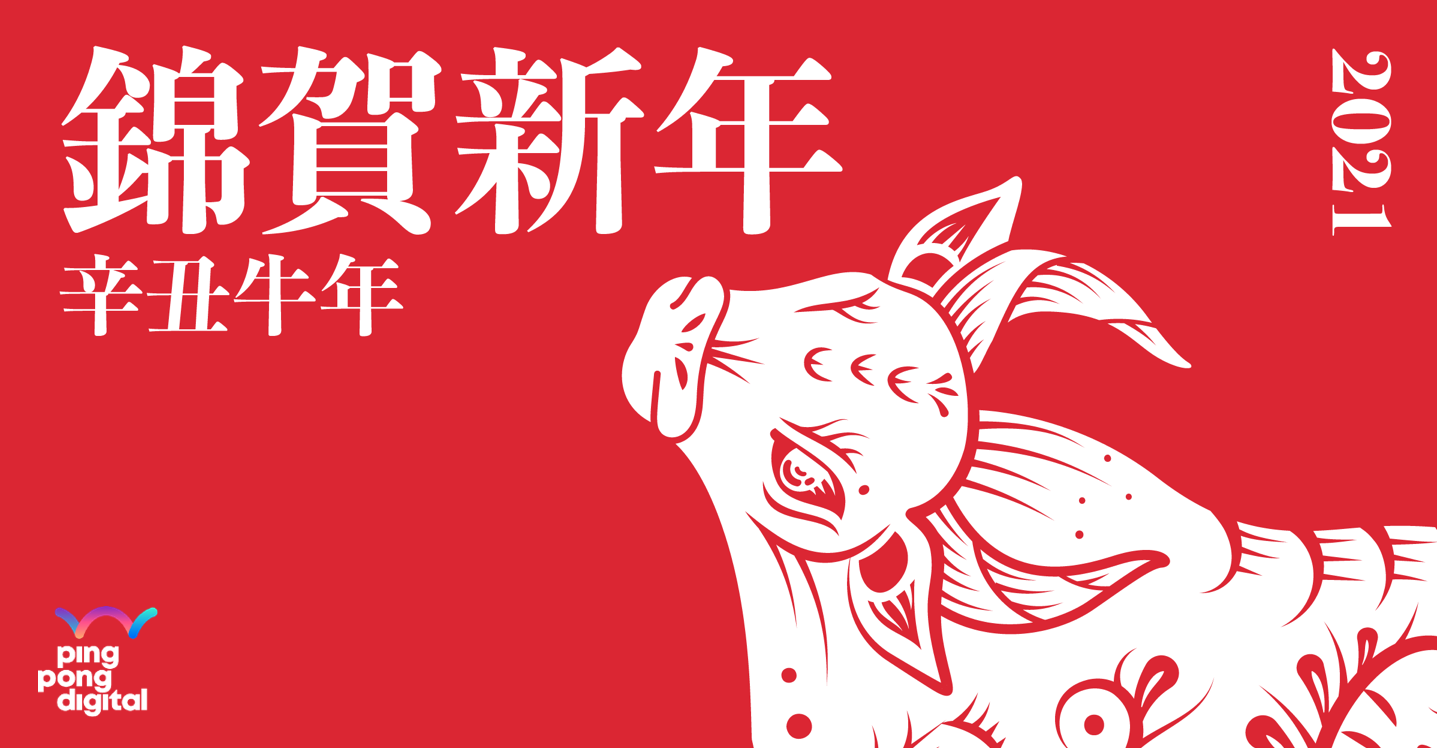 Don’t be surprised if you find that your colleagues in China are somehow collectively on holiday, or that the shipment you’re expecting from China is delayed until later this month — yes, it’s Chinese New Year again!

This week, all Chinese communities around the world are seeing off the turbulent Year of Mouse/Rat (actually, the Year of Mouse is long known to be less fortunate compared to other zodiac animals, according to Feng Shui), and welcoming a more hopeful Year of Ox!

Like Christmas in the West, Chinese New Year is no doubt the most festive time of the whole year for Chinese. Normally, we’d gather with family and friends for a few days of relaxation and celebration, with food and drink and entertainment in unlimited supply. Although the pandemic is still ongoing, and many of us are forced to modify how we celebrate Chinese New Year, there is nothing that can dampen the festivity that we’ve been yearning for for quite some time.

For brands, Chinese New Year is one of the most important times for marketing and advertising to Chinese audiences, as Chinese New Year gives us the much anticipated permission to shop for gifting, for self-upgrading, or, for no obvious reason at all. So every Chinese New Year, advertisers battle it out for Chinese consumers' attention. This year is no different.

We summarised some notable trends from this year’s Chinese New Year digital marketing campaigns in China.

Red packets, well-wishing and other traditions take a digital turn

For Chinese people, giving red packets with “Lucky Money” inside and sending good wishes is at the top of the must-do list during Chinese New Year.

Brands, too, have adopted digital red packets as an essential marketing tactic. This year WeChat opened access for brands to customise their digital red packet design, which has attracted a wide range of brands including Louis Vuitton, Dior, Gucci, Burberry, Fendi, Lancôme, Estée Lauder, Cartier, Versace to launch their own digital red packets for the Chinese audience on WeChat.

Digital red packets are a great way to engage with your Chinese audience, offering them cultural relevance as well as brand-specific communication. Many brands also embed effective CRM approaches within red packet marketing, to increase the size of the audience pool and encourage conversions.

Short videos are at the forefront of CNY marketing this year

Though the pandemic has been largely controlled in China, it has created difficulties for many people to travel. Therefore, more are resorting to short videos to sharing their wishes this year. We call it “云拜年” (Cloud Well-Wishing).

Short videos took off in China in 2019 when Douyin, TikTok’s Chinese twin sibling, swept the country and it played host to over 30 million well-wishing short videos during Chinese New Year 2019. This year, Douyin has become a much bigger giant in the short video sector than two years ago with over 700 million users; one can only imagine the staggering number of well-wishing videos that will be uploaded to the platform this year.

Brands are merging short video well-wishing and brand communication in order to stand out in the now video-oriented cyberspace.  In 2018, Apple partnered with Hong Kong director Peter Chan and created a touching short film - ‘Three Minutes’, about a railroad conductor who is on duty on Chinese New Year’s Eve, and only gets to see her son for three minutes when the train she works on comes to a scheduled stop at her city. The film was shot on the newly released iPhone X that year and caused much discussion and exposure.

The success led to many more brands utilising story-telling short videos and accurately targeted placement on social media to increase brand exposure. Mercedes-Benz, partnered with internationally acclaimed director Wong Kar Wai this year to tell a series of stories in the format of a short video about “coming home”.

Different from the traditional TV ads, these short videos are made to fit social media. They are short and story-driven, and most importantly, they sit in the social media ecosystems, which not only brings them exposure, but also conversions.

From individuals to brands, live-streaming is gathering pace

Live-streaming has been phenomenal in 2020. No one expected that live-streamers, who sit in front of a camera talking about products, would become a top driving force for consumption, but according to a report, the top 1,000 live-streamers on Taobao, Douyin and Kuaishou generated a stunning 255.7 billion RMB sales last year.

A large number of fashion, luxury, cosmetic and FMCG brands have participated in live-streaming sales last year, and all achieved positive results.

This trend has shown no signs of slowing down during Chinese New Year, with the majority of top live-streamers having streaming schedules planned and brand promotions lined up in the next few days. With the entire country on holiday, but with many house-bound due to COVID-19 restrictions, live-stream sales are expected to hit record highs.

Now, after a few years of growth, live-streaming as a marketing tactic is maturing. Many new brands are now experimenting with live-streaming: in fact, a few newcomers have made impressive successes already — Huawei and Suning are among the top 20 sales-driving live-streamers.

There is every reason to believe that in the Year of the Ox, live-streaming will not slow down its pace and more brands will try their hand at it.

The pandemic is drastically reshaping consumers’ behaviours worldwide, sometimes causing disruptions. Chinese consumers, however, seem to have settled in the internet-based “new norm” more comfortably, thanks to its early development in digital lifestyle in the past decade.

Today, as we celebrate the first day of the Year of the Ox, we at PingPong Digital hope this blog has offered you some insights in making your “Chinese New Year Marketing Resolution.”